A live tour is the best way to experience all the unique attributes of our data centers first-hand. But we fully realize that sometimes that’s not possible, so we have created 5 short videos that allow you to virtually “go inside” our centers and see for yourself what makes Net Access so special. Click below to go to our new video page, where you can chose from short 2 minute videos about High Density Colocation, Disaster Recovery Seating, Data Center Power Systems, Data Center Cooling Systems, and Physical Security.

Why We Aren’t Complaining About This Cold Weather! 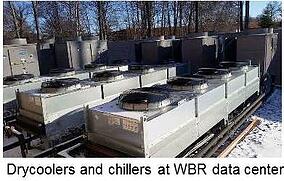 There are many aspects that go into running a data center successfully, but I think we would all agree that uniform, consistent temperature on the critical floor is certainly one of the most important. Customer equipment likes to have a reasonable temperature (we target 72* F), that does not vary - no matter what time of the day, or day of the year that it is.

What many customers do not realize is that from a facilities perspective, computer gear makes for wonderful space heaters. Typically, for every watt of power used by a piece of equipment, roughly 99% of that watt is converted into thermal energy (heat), and we are tasked with removing that heat from the datacenter. In our application, we have chosen to use closed-loop chilled-water cooling systems. Essentially, we use a chiller which makes cold water (about 54* F) and pump it through a coil in the environmental control rooms of the datacenter, and push the air that is coming from the computer gear through that same coil.

The problem is that these chillers consume considerable power, sometimes using upwards of 50 watts for every 100 watts of heat generated by customer equipment (thus, a Power Usage Effectiveness (PUE) rating of 1.50).

So, you ask, what does this have to do with 15* F outdoor temperatures?

Well, when we send the water out to be cooled by our chiller units, we first send them through what is known as a drycooler, which uses outside air to cool the water before we put it through the chiller. In our application, whenever the outside air temperature is about 50*F or cooler, we are able to cool the chilled water to our desired temperature of 58* F without using any chiller power whatsoever.

Consider the diagram below, which shows realtime operation of one of our many cooling modules in our Parsippany 2 (WBR) data center:

Our typical cooling module is designed to handle 100,000 watts (or 100 kw) of customer equipment heat load (roughly 30 tons). In the case above:
- Datacenter return air is entering the inside air handler at 83* F, and being sent back to the datacenter at 72* F.
- The chilled water as it enters the air handler is about 56* F, and leaves the air handler at 63* F.
- Before the chilled water makes its way to the chiller, it passes through the drycooler.
- 8* F outside air is entering the drycooler, and 54* F air is leaving the drycooler.
- The water leaving the drycooler and entering the chiller is 54* F, and the chiller has nothing to do because the water is already at the target temperature.
As you can see, the drycooler fans are only consuming 0.1 kw (or about 100 watts) pulling the air through the drycooler to chill the water. If the chiller were doing this same work, it would be consuming about 5.8 kw (5,800 watts), or 58 times the power.
In this example above, this module is using 6.1 kw and providing 62 kw of cooling. In using a common industry metric of PUE, this equates to 1.10.

We know most people complain about the cold, but we are more than willing to put up with these low temperatures for a while longer!